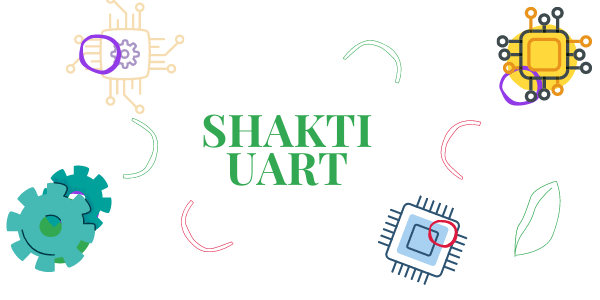 Now we are going to try transmitting and reading from the UART directly using UART registers. Also, using the functions. Lets see just how to do that!

Step1: Setting the Baud rate for the UART instance’s register

The baud rate is a measure of the number of bits per second that can be transmitted or received by the UART. Clock frequency for SHAKTI is 50 MHz.

You can do this by calling the set_baud_rate function or by writing the hex value directly onto the address of the baud rate register.

Setting baud rate as 19200 through RISC-V GDB, use the following command

This is similar to the putchar function. Now we are going to print a character to the Miniterm which is connected to UART 0. This can be done in two ways,

Writing character ‘B’ to the miniterm through GDB

This is similar to getchar function. Now we are going to read a char from miniterm that is connected to UART0. This can be done in two ways,

For instance, Reading the char pressed from the RISC-V GDB, use the following command

Pressing q, w, e from the miniterm and checking the address location 11308 simultaneously

Simple UART program to read and write to UART 0

Check out this article on “How to print “Hello World” on Shakti using Arduino IDE?“

How to Use Pulse Width Modulation (PWM) with Shakti Processor?

How to use Platform Level Interrupt Controller (PLIC) on Shakti?