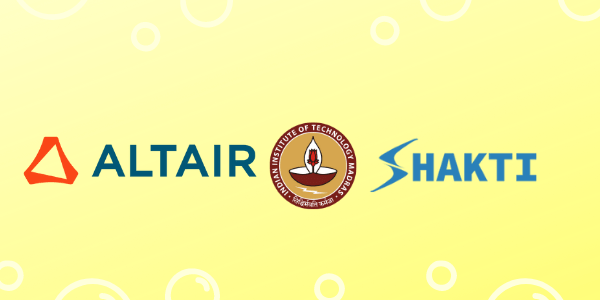 India’s indigenous microprocessor SHAKTI is now a part of Altair embed. Altair Embed is model-based design software for developing algorithms for complex embedded systems. It offers thousands of pre-built models that cover a wide range of engineering disciplines. Also, with a search function to identify a model that matches your design requirements and broad target support. This is possible due to the collaboration between IIT Madras, which designed and developed Shakti, and US-based global technology company Altair.

Now let’s see what makes Altair embed different from other IDE’s we already use. Also, why this is an important milestone for SHAKTI. Altair embed can simulate, analyze, and automatically generate efficient code that can be downloaded, executed, and debugged. It already supports 1200 microprocessors including STMicroelectronics, Texas Instruments, AMD64, Raspberry Pi processors, and Arduino MCUs.

Prof. V. Kamakoti, our founding member, explained that every Embedded system comprises a microprocessor and software executing on the same. Also, he added that the collaboration between the Institute and Altair platform provides the framework to develop software, such that it is executable on the Shakti processor. “This enables rapid translation of ideas into working systems for embedded system driven Industry and especially startups. We expect a significant increase in usage of Shakti based on this collaboration” he told us.

Altair embed has a basic and a professional version. However, Altair Embed Viewer is available as a free read-only version of the Professional edition. Authors and educators can use this version.

Altair embed has a basic version which includes,

“Altair believes that collaboration with academic institutions is a powerful and effective tool to advance technological initiatives. We have been following the open-source RISC V architecture for some time, and it’s exciting to see Dr. Kamakoti and IIT Madras make such creative use of it,” said Peter Darnell, Chief Scientist, Altair.

As we know, SHAKTI Processor development has always been a student-driven project, backed by industry veterans. Now for it to reach the production level and to be a part of other commercial processes is a great milestone for us!

Swadeshi Microprocessor Challenge, the competition of the year!